Sometimes you start doing a sketch or an animation test, and you don’t know where it’s going but you start seeing how it could make sense for a particular brand, idea, project, or in this case, a band. I was playing around with Trapcode Particular and the Auxiliary System settings and came out with these eel-looking shapes. All of the blueish eel-things are made with Trapcode Particular, while the actual title that spells the band name is modeled/animated in Cinema4D Using the Spline Wrap Deformer and shaded using a lot of Subsurface Scattering.

The end result was a mix of creepy, psychedelic, and a little on the birth/womb nature. I was happy with where this was going, and wanted to develop it a bit further – so I thought to make this work around the band The Flaming Lips.

The Flaming Lips are an amazing band to see live – when I saw them at the All Tomorrow’s Parties festival in Monticello, NY a few years ago, they entered the stage through an LED screen/curtain that was projecting a woman with her legs spread. Naturally, they emerged from behind said screen from what appeared to be her whispering eye.

For context: Here’s a picture of basically the same thing I saw, but at another show. Photo by Kevin Harber. 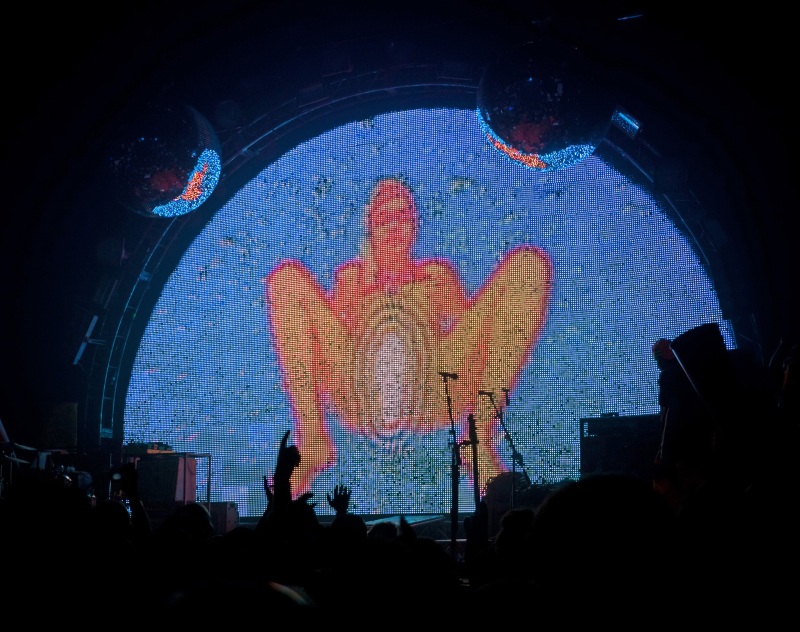 In that sense maybe that’s why anything womb-like I instantly relate to The Flaming Lips, and why I thought this odd animation/stlye would fit right with them.