While this post isn’t about an overly technical project nor its intricacies, it is about making the most of what you have.

As I said in the Iceleration post, I am not a character animator. However, I was presented with the task of animating a miner digging. I handed off the concept brief to our intern designer Therese Albertsson, and she made the character and environment in separate layers for easy rigging and layering.

Fast forward to an IK setup/texturing/grading later, and we had a little 5 second test of the miner digging. All ready to be sent off to the client. Next thing we know, the client really likes the style but doesn’t have the budget to proceed.

We were stuck with 5 seconds of animation and no budget to keep going forward, plus other projects and deadlines now taking priority. 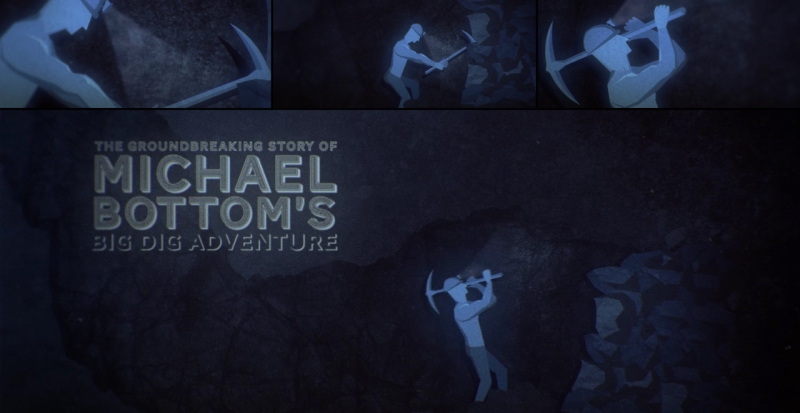 So what do you do in this position, as an animator and/or motion designer?

What you do is you dig a little bit deeper. 5 seconds of character animation might not be enough to tell a story, but it might be enough to get a feel for something.

Enter “The Groundbreaking Story of Michael Bottom’s Big Dig Adventure” – a made-up film who’s only point is to give a 5 second motion test context and a purpose.

So what if the animation won’t be fleshed out and developed? A faux-story is better than an uninspired motion test.

Most people don’t know or care how many joints/bones/controllers went into a character; they just care about the end result. And if that wasn’t enough, to the untrained eye something that’s not polished and doesn’t go anywhere just isn’t worth their time.

Tweak it, add some music and sound effects, maybe even a title (as ridiculous or irrelevant as you want), and it will make it seem bigger than what it is. Trust me, the original brief had absolutely nothing to do with adventures nor Big Digs.

So the moral of the story is, even if you didn’t complete a project, try to salvage some part of it. It will make you feel proud to show it to people, and you won’t have to explain that it’s just a motion test or a failed pitch.

The whole “see positive in the negative” bit, but applied to animation.